What are liquid biofuels?

Liquid biofuels are fuels that can be produced from renewable material of plant or animal origin. They have been used worldwide for over 20 years.

Liquid biofuels used in transport are typically bioethanol, a petrol substitute, biodiesel, a diesel substitute or biocrude oils, which can be used to replace diesel or bunker oil in marine-type engines or industrial-scale boilers. Biodiesel can also be used in residential and industrial space heating.

One of the easiest things New Zealand drivers can do to help the environment is to start using sustainable liquid biofuels. 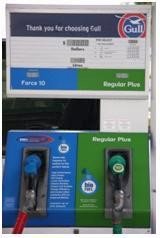 Bioethanol produced by Anchor Ethanol from whey has been made in New Zealand for many years. Greenfuels NZ in Canterbury have been making biodiesel from used cooking oils for a number of years and from time to time other companies make small quantitites of transport biofuels.

The advanced biofuels which are made from wood and other similar feedstocks are often referred to as 'drop-in' fuels as they can fully substitute for mineral based fuels.

Research into the production of biocrude oils are currently produced only at demonstration scale and are not commercial available.

The future liquid biofuels are likely to be of the advanced biofuel types and biocrude.

All liquid biofuels produced in New Zealand are produced from sustainable feedstocks. There are no subsidies to produce biofuels and therefore no incentive to use productive land for energy crops instead of food crops.

Bioethanol in New Zealand is currently produced from whey, a dairy industry by-product. Internationally, work is underway to produce bioethanol from wood waste, such as wood chips, and household waste, such as paper, pulp and sewage. Bioethanol can be produced from a wide range of sugar and starch-based feedstocks, such as sugar cane residue and soya beans.

More information on the production of bioethanol from a wide range of feedstocks can be found here.

Biodiesel is a methel ester fuel but has similar properties to mineral diesel but is made from vegetable oils or animal fats. It has good combustion and lubrication properties. Biodiesel in New Zealand is likely to come from tallow, a by-product of meat processing, or from used cooking oil, and from rapeseed (canola) grown as a 'break crop' in rotation with other crops.

Mixing biodiesel with ordinary diesel makes a biodiesel blend, which is often used in the retail market. As with bioethanol blends, biodiesel blends are often referred to as B5 or B20, which relates to the percentage of biodiesel in the blend. For example, B5 means 5 percent of the blend is biodiesel, B20 means 20 percent is. A 5 percent blend is the maximum allowed for retail sale, but higher blends can be sold directly to commercial users where there is a written contract for supply.

Advanced biofuels have the same chemical composition as mineral fuels and therefore don't need to be blended with other fuels to meet engine warranty requirements. More information on advanced biofuels is available here.

Slow and fast thermochemical decomposition of biomass and other organic matter can produce a biocrude oil that requires less refining and preparation for use as a fuel in heavy, industrial type engines, such as marine and rail.

Biofuel production also usually produces what are known as 'co-products'. These are biochemicals used to produce products like bioplastics, sugars and resins, which can have significant value - often greater than the value of the biofuel energy produced.