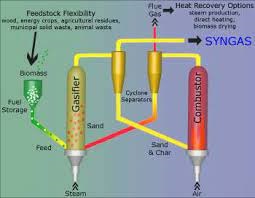 Gasification is a process that converts biomass- or fossil fuel-based carbonaceous materials into gases, including as the largest fractions: nitrogen (N2), carbon monoxide (CO), hydrogen (H2), and carbon dioxide (CO2). This is achieved by reacting the feedstock material at high temperatures (typically >700 °C), without combustion, via controlling the amount of oxygen and/or steam present in the reaction. The resulting gas mixture is called syngas (from synthesis gas) or producer gas and is itself a fuel due to the flammability of the H2 and CO of which the gas is largely composed. Electricity can be derived from the subsequent combustion of the resultant gas, and is considered to be a source of renewable energy if the gasified compounds were obtained from renewable biomass feedstock.

An advantage of gasification is that syngas can be more efficient than direct combustion of the original feedstock material because it can be combusted at higher temperatures so that the thermodynamic upper limit to the efficiency defined by Carnot's rule is higher. Syngas may also be used as the hydrogen source in fuel cells, however the syngas produced by most gasification systems requires additional processing and reforming to remove the contaminants and other gases such as CO and CO2 to be suitable for low-temperature fuel cell use, but high-temperature solid oxide fuel cells are capable of directly accepting mixtures of H2, CO, CO2, steam, and methane.